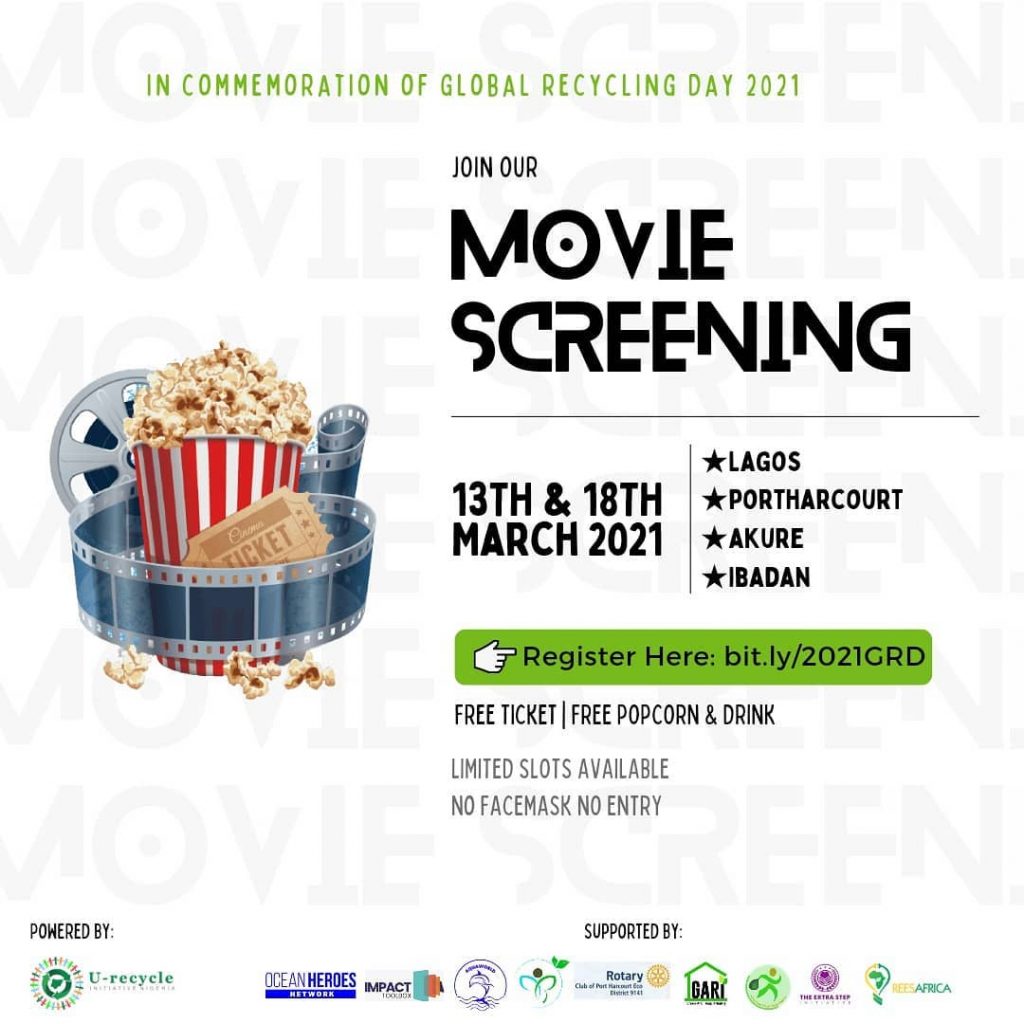 Nigeria generates an estimated 32 million tons of solid waste per year, out of which plastic waste constitutes 2.5 million tons (BioEnergy Consult 2020). Irresponsible and incessant disposal of waste has led to blockage of waterways and drainages, which sometimes result in flooding that destroys lives and properties.

For example, during the lockdown – 18th June 2020 to be precise –  videos went viral on the internet about an estate, Gemade Estate here in Lagos facing an issue of excessive flooding.

Most people opined that this flood was a result of narrow drainages but failed to realize that the drainages had been clogged due to the improper disposal of waste materials especially plastic waste, through littering and dumping by passers-by. Unfortunately, this is just one of the many flooding cases that arise from improper waste disposal.

In addition, plastic wastes – more often than not- end up in the ocean threatening ecosystems, killing biodiversity, choking the world’s ocean animals, and poisoning the food chain.

Plastic waste, which is non-biodegradable in nature, never ever goes away. We need to end the ‘throwaway culture’.

The result of our negligence is however apparent. According to a report by WasteAid, dumped and burned rubbish,  especially plastic waste, is responsible for the death of one person every 30 seconds in developing countries.

Plastic pollution is clogging our waterways causing flooding, injuring and killing wildlife, and endangering human health, yet the excessive generation of plastic waste is still the order of the day.

Global Recycling Day is celebrated every year to raise global awareness about the urgent need to stop dumping waste. The goal of this day is to unite the world’s approach to recycling: from world and community leaders to businesses and individuals while encouraging the world to think of “RESOURCE” rather than waste. This way, we can celebrate the planet’s seventh resource: recyclables.

In previous years – with the immense support of several organizations-  we commemorated this day in Lagos engaging hundreds of people in the process.

Our first event was in 2019- Nigeria’s First Major Global Recycling Day Event- where we enlightened and engaged schools, stakeholders in the recycling sector, and the public. This event attracted local and international press attention, including on BBC radio,  international blogs, and local tv stations.

In 2020, to commemorate GRD, we organized a 5.4km awareness walk, a Bring-Your-Own-Bag campaign at Shoprite Mall, and a Trashion Show which enlightened youth, community-dwellers, and vendors on practical ways they could prevent environmental pollution and gain value by recycling their waste. To put words to action, we convinced  41-65 people to sign up for a ‘trash-to-wealth’ household recycling program offered by Wecyclers; a recycling company in that city.

In 2021, with the support of various local and international organizations, U-recycle Initiative had a series of movie screenings in four cities (Lagos, Ibadan, Port-Harcourt, and Akure) to commemorate Global Recycling day 2021 with a total number of — participants.

The spotlight for the event was the movie screening which enlightened the audience on the lifecycle of single-use plastics, and their effects on land ecosystems, the marine environment, and human health. The movie screening was based on an entertaining documentary about the plastic pollution crisis called BAG IT, which educated the audience about the plastic pollution crisis and spurred them to take more informed actions to #beatplasticpollution.

The movie screening was followed by an Eco talk aimed at educating and enlightening the attendees about HOW TO REDUCE PLASTIC FOOTPRINTS.

It ended with each person participating in the Ditch Plastic Straw campaign. The purpose of the  #DitchPlasticStrawCampaign was to encourage individuals to take pledges to STOP the use of plastic Straws. Plastic straws are harmful to the environment and marine species because they cannot decompose. The improper disposal of these straws has ended up contributing to the existing debris in the oceans– which is killing the marine species.

In light of this, reusable bamboo straws were distributed as souvenirs to the attendees so as to trigger their interest.

The feedback from the participants and state coordinators was just as expected. We believe that by educating people about the plastic pollution crisis, they can take more informed actions towards reducing their purchase of single-use plastics and encourage the habit of re-use and recycling.

At the end of the event, attendees were enlightened about the dangers of plastic pollution, its causes, and practical ways they can cut down their plastic footprints through reducing, reusing, and recycling. This event also featured a short seminar, quiz, and a plastic creativity class after the Movie show.

This was a pilot project, to implement recycling in secondary schools. After one year, we are glad to see the progress made, preventing 337.8kg (over 12000 plastic bottles) from polluting drains, polluting oceans, harming aquatic wildlife, and ending up in landfills. This project was done towards promoting our goal of converting waste to value.

To reward their amazing effort, we created an outdoor seat (monument) constructed from plastic for this school, celebrated the class that was most committed/active in collecting plastics for recycling with prizes and We also celebrated the teachers who spearheaded this project and other projects at this school with awards.